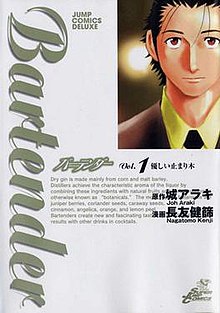 Every now and then an anime will come out of left field and surprise me.

I’ve seen this mentioned a few times, most recently by Irina, Dewbond and Amelia. By others too but I can’t seem to find the links. Somebody had a bartender’s review of “Bartender” on their site but my mind is failing me. Let me know and I’ll add you in here.

Bartender is based on a manga by Kenji Nagatomo. You can get the 11 episode season on DVD from Pony Canyon, otherwise it is between you and Google. I understand it is being released for television in the UK and Ireland by Anime Limited. There was a live-action version aired on Japanese television in 2011.

Sorry, dubs are in German…

“Bartender” is a slice of life about a bartender, Ryuu Sasakura,  in an out of the way and

unknown bar called Eden Hall in the Ginzu district. There are never many customers there, so I wonder how it stays in business.

It is an adult anime. You won’t see adorable moe lolis nor will you see kawaii high school girls. No overexposed cleavage or rippling abs. These are all grownups with very grownup problems.

Every episode features a different drink. A different person enters the bar with different issues. Might be work-related. Might be love related. Might be something else. But this bartender isn’t just there to serve liquor. He’s got an eidetic memory for every customer’s drinking history. His sleuthing skills whereby he discovers your life story from a few small clues are Sherlockian. His psychoanalytical powers would embarrass Freud, Adler, and Jung combined as a team.

With this god-like insight into the human condition, he then mixes you a drink that perfectly matches your needs and leads to greater self-awareness. His drinks have become known as the Glass of the Gods for their ability to assuage your pain and match your innermost feelings.

This bar has a magnificent back-end with a collection of fine and rare liquors. Sasakura will often discuss other great bartenders in history and the drinks that made them famous. Other bartenders and customers show up from time to time as narrators. Most commonly we see Higashiyama and Kuzuhara, his bartending mentors, and Miwa Kurushima an early customer. He figured out a liquor she was looking for just from her memory of the bumpiness of the bottle and the background story of why it was being given.

Each show stands alone. You could watch them out of order but there is just enough sequence I’d suggest starting from episode one and watching them in order. (My personal favorite is episode 8.) Every episode follows the same plotline. The problems and the people are different, the drinks that are devised are different but the resolution of the finding, making and appreciating the perfect drink is the same.

But great art isn’t needed here. After a few drinks, you won’t notice.

In many ways, it reminds me of a sleepy version of Mushishi in its relaxed tone. Some people may find it pedantic with its in-depth explanation of the origins of different malts in Scotland or how the frozen daiquiri featured in The Old Man and the Sea or how the Margarita came out of a terrible tragedy. Or the preposterous notion that the answer to life, the universe, and everything can be found in an Aphrodire.  But I love this stuff!

I don’t recommend bingeing on this. Save it for that occasion where you want to unwind to something relaxing with a cocktail in your hand..

If you like the premise of people presenting their problems to a sympathetic bartender, you’ll like the anime. If you love the history and the art and science making of cocktails and other drinks, you’ll love the anime. Otherwise, you’ll start to get bored. But even then, I think you’ll enjoy it for a few episodes and since there is no long term arc here you can walk away without feeling you missed the resolution.

You might even find a new drink to try.

One thought on “Bartender”