final exam for the docent position at the local nature center.  (I passed but they shut the place down a week later.) One person there had a cold. Of course, I think I caught it. I never got close to the person who had the cold, but…

I had a bad sore throat for a couple of days, felt really draggy.  No fever, no lung involvement, productive cough. Not COVID-19. It is just a cold. However, it is a lesson on how easily things spread. All it takes is to touch a doorknob someone else has touched who had the bug. Then you touch your face, something most people do unconsciously about every minute. The virus find its way to a mucous membrane, eyes, nose, lips, throat.

What remains is a minor sore throat in the morning that might just be allergies and post-nasal drip. All the rain we’ve been having is causing all kinds of growth and things to bloom. Allergy season is upon us.

Helping others is good for the soul.

Someone knocked at our door. The dogs went crazy. By the time I got there, they were gone. But there was a gift from my wife’s Temple. The Temple is only holding remote services but the Rabbi and some helpers were delivering Challah to all the congregants. It is a cliche’ – but it is true. Calamity brings out both the best and the worst in people.

Trips. Aside from locations for social gatherings being ordered closed, it is mostly on the honor system. You can still visit friends at your own risk, it is just advised against.  Many people still go to work. You still go to the store to shop for food or a restaurant for pickup. You still go to the park for exercise.

The parks aren’t even closed. Just the touristy facilities where everyone hangs out. Go to a national park and vacation far from the madding crowds.

The military isn’t prowling the streets looking for scofflaws. No armed barricades around hotspot communities. We aren’t being required to take our temperatures and report daily to the government. People are not getting hauled off to internment camps because of a fever or sore throat. Just told to stay home unless it is an emergency.

Here it means that the big social gathering points – where one person could contaminate many others – are shut down. If you fail to take precautions you’ll only be infecting one or a couple people at a time. For infection to pass, you have to be close enough and neither one is being careful enough.  That flattens the curve. 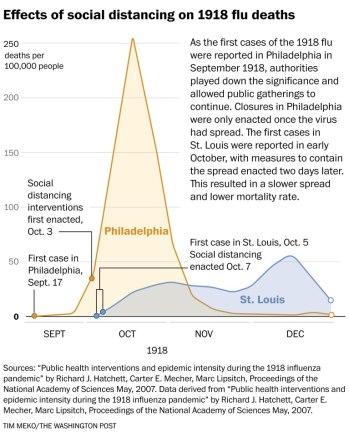 hermit for months on end. Which means a majority will still get infected regardless of efforts. The idea is to stretch it out over time so that at any one time the total number with serious problems doesn’t horribly overload the medical system. The ratio of healthy to sick people remains high enough that the former can care for the latter. All the money and resources allocated by the government takes time to percolate into the system.

Every day that goes by means our techniques for fighting the virus improve. Production of tests and protective gear and support equipment spools up more. If we manage to stretch this out for 12 months, in 6 months they might have a vaccine that would truncate the entire second half of the epidemic.

Don’t expect instant progress. All things take time and being upset about it will not manufacture tests faster.

Boredom is my greatest enemy.

The things I love to do are all unavailable. Acting classes, docent work, figure modeling, all closed indefinitely.  The cold and rainy weather means no hiking for all that time either. So I should be doing other things. Writing, watching anime, watching Netflix,  long-delayed household chores, are all calling to me. I could use the time to learn another language, read books, take online courses, learn to do video editing, learn to do 3D illustration, rewrite my script for the umpteenth time and wander about the house rehearsing.

The problem is that I don’t feel like any of them. My psychological energy is sagging. Instead, I have difficulty getting to sleep at night and even more difficulty getting up in the morning. I watch the latest COVID-19 coverage every day. It is mostly saying the same thing with slight modifications over and over, coupled with wild speculation about possibilities that may or may not happen. After an hour I turn it off. Nothing new to see here, just move along.

I weighed 166 when all this started. I weighed 172 this morning. Comfort eating and lack of exercise.

Things will change. Some for the good, some bad.

Kaiser is thinking about having my wife telecommute. Her current job is telephone and

email triage, something that could easily be done from home.

Coronavirus is going to revolutionize America and maybe the world. All those commuter jobs that suddenly get changed to work from home? Once we have proven that they can be done via telecommuting, why would we go back?

I’ve been talking to theater owners. A lot of smaller live entertainment venues may not come back after the epidemic peters out. They will be forced to sell out to people who want the building for more profitable endeavors. The larger ones and ones supported by the government and private foundations have the money to endure and will collect much of the custom of those who used to go to smaller venues. “Theater row” in Hollywood may be gone forever and small shoestring productions a thing of the past. Very bad news for my show.

School is out for the year in most places. Homeschooling and distance learning will

dominate. Once again, we will have learned that we don’t need to waste the resources for large centralized campuses for many disciplines. There will be a revolution in childcare too. Tens of millions of people confronted by the need to care and educate children out of school will have to find solutions. Once those solutions are found, they may turn out to be preferable to what they did before.

I cannot see any way to function as a society with mass hospitalization without social medicine of some sort. Would we then give it up after the plague is over?

We walk the dogs a couple times a day. Sidewalks are busier than I ever remember them. (Well except after the ’94 earthquake, when they were really busy.) People walking dogs. People walking kids. We see neighbors talking to each other while keeping a safe distance. They have dogs too. We cross the street to go around.

Does this accelerate the shift from IRL-based social relationships to social media? Or will we rediscover the merits of a slower lifestyle and focusing on our families?

A brief history of generations.

Every generation has its trial. My father’s generation (the “Greatest Generation”) had WWII. His parents were from the Lost Generation of WWI. The generation in between those two was the Great Depression generation. The Silent Generation had the Korean War, McCarthyism, and the early Cold War. The Baby Boomers experienced Vietnam and the “Counterculture.” For the Late Boomers (me), it was all about the energy crisis and the later Cold War. (The Cold War and the many different sub-crises within it dominated 45 years of US History but rarely gets touched upon in schools.)

GenX had the 9-11 attacks and the ensuing War on Terrorism. This crisis belongs to the Millenials. (There will probably be more.) We’ll probably leave getting serious about climate change to GenY and GenZ. Each generation emerges with a new perspective.

Unfortunately, each new generation tends to discard the hard-won lessons of previous generations. A generation gap seems a permanent and inevitable fixture in human society.  I guess there’s nothing to be done for it.

There is comfort in being alone.

We make sure to start and run our cars every couple of days. Leave it go for too long and the battery could die. All those post-end-of-the-world movies and TV shows where people start cars that have been sitting for months or even years? It ain’t gonna happen. Batteries die from disuse. Gasoline evaporates and goes bad. Lubricants slowly solidify.

On the good side, my social anxiety level is at zero. The main source of anxiety in my life has always been interactions with other humans. As I grow older it is becoming more pronounced. I feel less defiant. I used to take the position that I’m ok and you’re ok but if you don’t see that, God bless you and I’ll just move on. I’m less able to do that. With the kids grown and on their own and being retired, you’d think my fear of committing social faux pas would be lessened. It isn’t. Just the opposite.

It is curious that I can face the risk of death with equanimity but social interactions are fraught with anxiety. I will try not to get sick

but if I do, oh well. That’s stoicism. Assume that I’ll still be here when it is over because the alternative isn’t useful.

I’m still hoping I’ll get the opportunity to do my show in some fashion when this is all over. If I don’t, I may have to make an opportunity.

It looks like maybe Saturday would be a good day for a hike. I’ll still take rain gear. I remember what happened the last time I went out with a 20% chance of rain.

7 thoughts on “Life Under Lockdown”